No products in the cart.

Bacterias are quick to be assumed that it would cause harm. Often enough, they are the cause of many infections and sickness most of the time. However, bacterias that reside in our gut however, are different. They have a complex and dynamic, mutualistic relationship with the host.

As all living microorganisms, there will always be byproducts, and in our gut microbiota, it produce a wide range of compounds that can be used by hosts as well as other microorganisms inside the body, much like a terrarium (Fischbach and Segre, 2016). Those compounds produced are known as postbiotics.

They are important in shaping the synbiotic system as well as establishing a healthy gut microbiota (Sommer et al., 2017) The common postbiotics produced by bacterias are cell walls, parts of cells (polysaccharides), short-chain fatty acids (SFAs), functional proteins, cell lysates, and teichoic acids. However, different postbiotics can be produced according to the food source for the bacterias, which are also known as prebiotic and probiotic respectively.

Postbiotic can be naturally found in fermented products such as cultured milk, kimchi, in soil of crops, and fermented rice bran powder, Life Faxtor™.

Postbiotics are a relatively new and intriguing topic for researchers. Prebiotic and postbiotics already have an exhaustive amount of studies however, for postbiotics, a lot are still being conducted. Thus far, the result and observations from existing postbiotic studies are very promising.

In a human intervention study with postbiotic in early life nutrition, 146 infants of 12 to 48 months old were recruited for a 3 month randomized, double blind, controlled trial. The intervention group was given cows milk fermented with L. paracasei CBA L74 while the placebo group were given normal cows milk with maltodextrin.

Researchers found that children from the intervention group are less likely to have infectious disease (22% less likely compared to placebo group). There are significant changes found in immune system biomarkers among the intervention group even after consuming prebiotics and probiotics. It was stipulated to be the effects of postbiotics conferring with probiotics (Corsello et al., 2017).

In another clinical study, a variety of fermented formula milk with it’s postbiotics and prebiotics  was given to 432 infants of 12 to 48 months old for 17 weeks.

They found out that infants that were given a percentage of fermented formula milk with prebiotics experienced less infantile colic (20-25% less) accompanied by less crying frequency and duration (median of 3.38 times a day to 2.64 times a day) compared to the control group, which only consist of prebiotics (Vandenplas et al., 2017).

According to a clinical study that looked into patients with irritable bowel syndrome (IBS), the patients were given inactivated fermented cultured beverages for a month.

They found out that patients with postbiotic have have lower bowel movement with improved stool consistency and reduced abdominal pain compared to control group (XIAO et al., 2002).

Probiotics that exist in our gut microbiota undergo a fermentation process which produces various postbiotics compounds.  Some of the common postbiotic compounds are in the table below.

As of to date, these are the common postbiotics that are proven in research. More research is required to further explore the concept of postbiotics and as a form of functional ingredient, food or as a supplement even though the positive influence of postbiotics towards gut microbiota are strong (Wegh et al., 2019).

With deeper understanding towards probiotics and its interaction with gut health and gut microbiome, we are able to establish foundations for postbiotics as well. Based on research, probiotics and postbiotic work hand in hand to produce compounds that the host can benefit in different environments and prebiotics. Hence, we formulate products that are best for your gut ! Check out our instant probiotic series here.

Wegh, Geerlings, Knol, Roeselers and Belzer, 2019. Postbiotics and Their Potential Applications in Early Life Nutrition and Beyond. International Journal of Molecular Sciences, 20(19), p.4673.

Graduated from UCSI University with BSc (Hons) in Nutrition with Wellness, Melvin decided to venture into research & development with past experiences in clinical setting, food service, and retail pharmacy. His goal is to formulate health products that are scientifically driven and culturally acceptable.

Furthermore, he is passionate in the science and art of preventing diseases and health education. Hence, he took the role as community nutritionist to advocate primary health care to the community.

PreviousWhat is it?: YourGutt Prebiotic, Probiotic, Postbiotic First in Malaysia & Asia.
NextProbiotic for the pandemic : How gut microbiomes influence immunity and covid’s severity?

Working From Home: How It Affects You And Self-Care Tips For Work-Life Balance 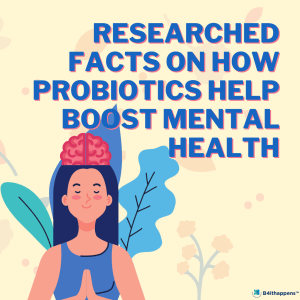 It’s all about your gut! YourGutt is the first in asia to have triple-biotics, Prebiotic, Probiotic, & Postbiotic that not only taste good, but also makes you feel good!